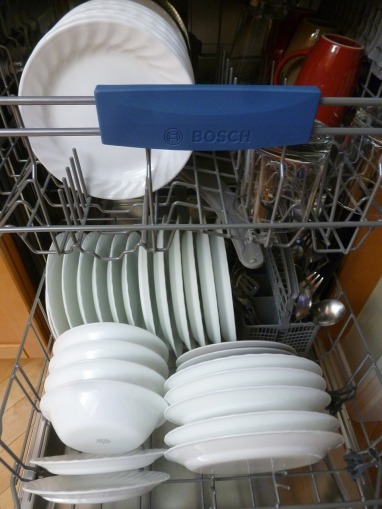 Just then, with a sigh, he wiped his hands on the dish towel and walked off mumbling, “I won’t be responsible for such irresponsibility!”

The man who never sees a sink full of dirty dishes and can leave a used tea glass parked by his chair for three days has strict guidelines for loading the dishwasher.  Each glass, plate, and utensil is rinsed thoroughly and placed in its own ergodynamic location.

This guy who leaves his coffee mug in the garage until the remnants are glued stiff to the cup bottom is a stickler for perfection in the dishwasher.  Overlapping dishes is a sin!

“Aren’t you afraid the dishes won’t get clean and we’ll get ptomaine from a piece of baked-on egg in-between a fork tine?  “Aren’t you the least concerned that the dishes are unorderly and just willy-nilly?”

“NO, I barked, “ as I closed the dishwasher door and pushed start.  “I’m more concerned with missing the last episode of “Sister Wives”!  I’ve heard it’s a cliffhanger!”

I admit I did for one moment consider he was right, but as I reached for a paper towel to put my cookie on….and clicked the remote, I knew there was no going back.

I am a photographer, writer, mother, grandmother, wife, retired educator, friend, aunt, sister, and believer. I am a motherless daughter. View All Posts