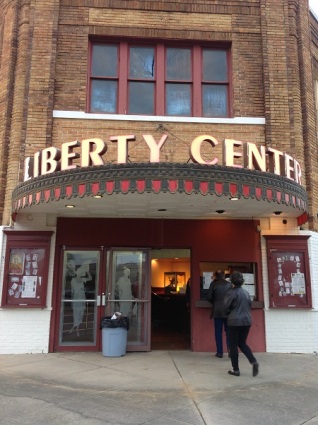 At age 13, I began my job in the family’s movie business at the Liberty Theater in Eunice, Louisiana.  I worked the concession stand at my grandma’s picture show.  Grandpa Keller had opened it in 1924 and had in later years owned 5 movie theaters in a town of about 10,000.

In 1969 when I started my picture show career, my grandpa had died and my Uncle Jake and Aunt Rose managed both the Liberty and the Queen Cinema. Even though I was his niece (and a star concession worker), Uncle Jake terrified me. Frowning and growling were his favored forms of communication with his employees.  One Sunday afternoon my dad picked me up from an afternoon swim at the local city pool “to go work at the show” because the matinee that day had drawn a bigger crowd than expected.  Dad rushed me to the Liberty to help out.   I  jumped from the pool, quickly dressed and showed up with a still-dripping ponytail to start boxing popcorn and waiting on the long line of costumers.  When Uncle Jake showed up to check on his employees, I felt pride inside for being such a loyal worker. He emitted a soft snarl to get my attention and grumbled, “Ya look like a drowned rat.”

Luckily for me (and my fellow workers), Uncle Jake did not routinely check up on us at the show. So most of the time, concession stand work was a groovy gig.  Opening up routines included wheeling the wooden carols that held the candy bars out of a storage closet and checking the Baby Ruths and Butterfingers for random rat bites.  Then we pulled out large plastic bags filled with the previous night’s leftover popcorn. This stale stuff would then be mixed in with the day’s fresh popcorn. (Is this a normal practice in movie theaters, or was my uncle cheap as well as grouchy?) Next, we’d get money from the box office lady to start our shift with. Later we’d go back to Mrs. Pearl (our favorite) or Mrs. Fontenot (a bit fussy) for extra nickels, quarters, or dollar bills as the need arose.

more customers.  Most days the work came in spurts – the 15 minutes before the movie began. And since the Liberty had only one screen, that meant only two busy times a night (week-end had more because of the double feature specials). Once a movie began, only the random harried mom with a squirrelly lil one or a bored teenager with a sweet tooth bothered us concession workers.  On slow week nights I always had a book to read, and I’d sometimes kill time with the teenaged  ticket-taker/ usher boy .

The job paid a slim $1.25 an hour, but it did include the perk of getting in free to movies.  However, as a Keller I already saw all movies for free, so I added a perk of my own.  I’d sometimes take candy bars to share with friends at school the day after one of my shifts.  I’d even “take orders” from some of my closest friends or a cute guy I was crushin’ on.   (“Hey, get me a couple of Milky Ways, will ya?”)

One of my favorite things about working at the show was that super-fine ice we used for the soft drinks.  Since workers unofficially got free drinks during our shifts, I’d pack my 8 oz. paper cup to the rim with that heavenly ice and then fill it with the best Dr. Pepper on the planet.  I think the syrup content on our soda machine was set too high, so our drinks were sweet, sweet.  And when a blockbuster like MASH or Patton was showing and we sweated to keep the popcorn popping and the masses served before the opening credits, a super-icy, super-sweet beverage never tasted better!

The jobs only 3 hazards were: 1.  Getting burned while making popcorn or cleaning the antique machine   2. Getting the stink eye or criticism from my uncle (“Quit over-filling the popcorn boxes; don’t make the sides pooch-out.” or “Put more ice in those drink cups!”)   3. Running out of popcorn during a rush.

For the four and a half years I worked at the “Liberty Thayter” (as Mrs. Fontenot would say), my good times far outweighed my bad times.  I was surrounded by folks who liked watching movies, talking about movies, and sharing movies. Often the usher, my fellow concession gal, and even the ticket-taker lady (especially sweet and witty Mrs. Pearl) discussed a movie’s good points, bad points,  or its message. Like the circus worker who shoveled elephant poop responded when asked why he didn’t leave such a shitty job. “What?? And give up show business?!”