My Daddy was a “saver”.  A procurer of particulars…a frugal forager.  It was probably because he was a product of the Depression, but for whatever reason, if you needed ‘it’, he had it, at least one and an alternate.

When Daddy passed away we found boxes full of souvenirs, balls of twine, ink pens, jars of nails and business cards.  We found his report cards, measuring tapes, hundreds of bank statements and thousands of photographs labeled neatly into chronological albums.  There were boxes, bags and myriad other containers full of his mementos.

My brother and I waded through his things sometimes laughing …sometimes crying.  Towards the end of our sorting, we bantered across to each other, “You take it!”  “No, YOU take it!”  Still, we filled large, black Hefty bags with things to give away or dispose of.  His obsessive ‘saving’ wore us out.  Sometimes, as we discarded, I whispered a prayer, “I’m sorry Daddy, we just have to let this go,” hoping he understood.

Last year I was going through a box of Daddy’s things that I had ‘saved’ from ten years ago.  When I brought it home, I thought I would go through it right away.  But, ten years had passed and I had just found the strength to open the box.

Inside were our report cards, Baptism announcements, college essays, school pictures and more.  I found an old, faded manila envelope, sealed with a piece of tape and enclosed were letters and cards my brother and I had sent Daddy through the years; Father’s Day cards, poems, and notes we had written him.  Behind those cards were letters tied with a string….our letters to Santa Claus.

I unfolded one pristine piece of notebook paper and I was transported, as I read my brother’s childish handwriting.

Dear Santa,  I hope that I have been good enough to deserve these things I want.  I would like a bulldog tank, an electric football game and a boy scout nap sack.  My sister would like a jewelry box, a ballarena doll, a girl cowboy suit and play doe, please.   From:  Jimmy and Nancy.  December 16, 1958

This letter was written one month before our mother passed away. Not all of our letters to Santa were saved, just this one and the ones the year after she died. My Dad wasn’t always good at professing his love.  He wasn’t the sentimental, mushy type.  But, after he was gone, I saw his tender side amongst the 14 retractable measuring tapes and boxes of Navy war memorabilia.  The cards and notes his children had sent and letters to Santa obviously touched his heart, although we never knew it.  His heart was inside this box that took me ten years to open. And, suddenly, all of this stuff he had ‘saved’, became a piece of him…a bridge to the other side, where he was standing, arms open wide, saying, “See?  I have always loved you.”  And finally my heart whispered back, “I know, Daddy.  I love you, too.”

In grief as in life, we often say, see or do things that make us feel better or more connected to our loved ones.

“Oh, there’s Dad again,”  someone may say while looking out the kitchen window at a cardinal sitting on a fence post.  While another might notice yellow butterflies on their morning walks, declaring, “I know that’s Mom.  She loved the color yellow.”

It’s not so much that I believe my loved ones are reincarnated into insects or birds, but it does feel like a gentle embrace from the other side, meant to comfort and bring peace.

My friend, Mary, passed away last year, rather suddenly.  She always loved dragonflies and was drawn to their vivid colors and flighty paths.  She had dragonfly notepads, nightgowns, and tote bags.  She adored all things ‘dragonfly.’

Try as I might, I am not convinced that every dragonfly I photograph is Mary.  “Hold still, little beauty,”  I whisper to them.  “Let me take your picture.”  I know Mary would have loved my photos and might even have asked for a framed one for her walls.  While I do not feel that these dragonflies are Mary, I do believe that it is her spirit that beckons me to seek the beauty in nature, urging me to take time to enjoy God’s creations.

We recently put up a new hummingbird feeder in our backyard.  I made the nectar and as we hung it I fully expected hummingbirds by dusk.  Two weeks later my little friend arrived.  Flighty, thirsty, and perfect, although not flashy in color like the butterfly or dragonfly.  Every day she drinks the nectar and then flits to an adjacent branch to hang out for a bit, then over to a flowering plant, then back to the feeder.  Then, without warning, she flies away until another time. 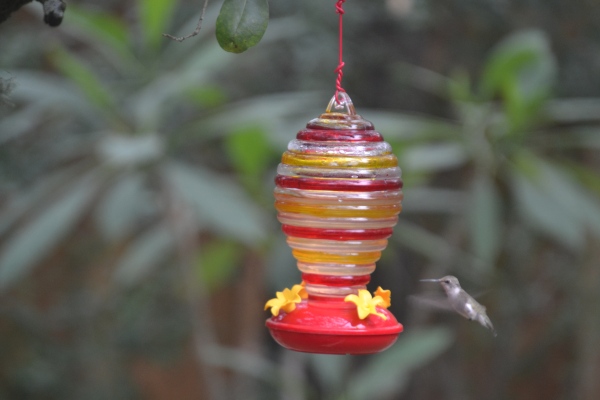 Hummingbirds are the smallest birds, yet they can travel up to 49 mph.  Their heartbeats nearly 1200 beats per minute and they get their name because of the humming sound of their beating wings.

I feel like a hummingbird sometimes.  My attention goes from details to musings.  I flit from rigid routines to spontaneous creations, photography, or writing.  My concentration varies.  My observations bounce.  When I’m dead and gone, will my daughters see a hummingbird and say, “ Oh, there goes Mom.  She never could sit still.”?

There are six large blue jays that visit our bird feeder every day.  Occasionally they are raucous and loud, trying to dominate the backyard.  I’d swear one of them is my Dad, just trying to get in the last word.  Trying to control, even from beyond!

It behooves me to wonder who would want to be remembered as a squirrel or pesky fly, but every family has one of each.  Maybe our loved ones visit as birds or maybe a Higher Power nudges us to notice the beauty in nature, helping us to slow down and feel a connection.  Whatever is true and whatever is your truth, enjoy the noticings and remember your loved ones from beyond.  And if you receive a hummingbird feeder from me for Christmas, keep it.  Someday, I may come for a visit. 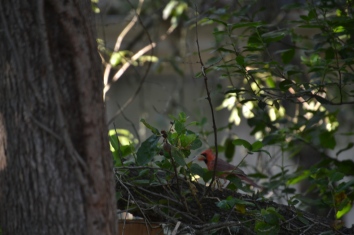 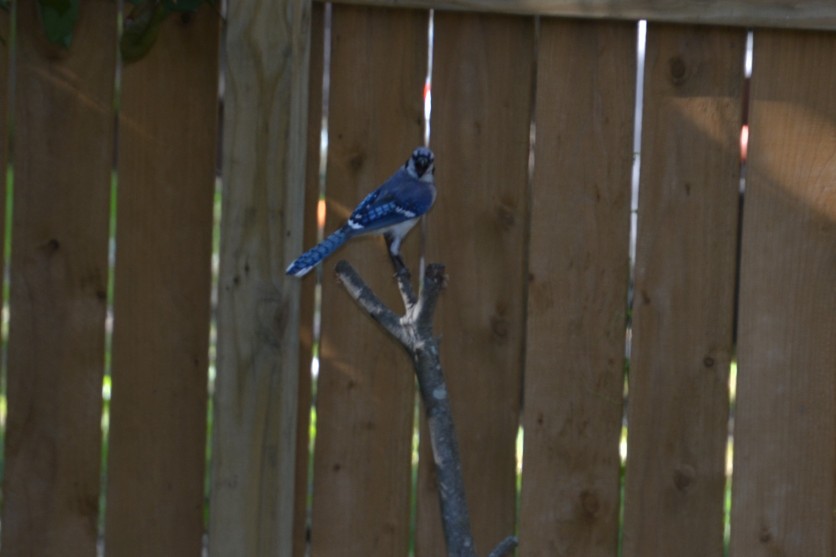