When I turned fifteen, I could hardly wait to take Driver’s Education so I could get my permit.   I remember that it was during summer school and we had classroom instruction with two weeks behind-the-wheel driving time.  I had already been sneaking my family car when my parents were out, so I was eager to be a legit driver.

My instructor was an old baseball coach who also taught high school algebra.  He called us all by our last names and was pretty easy going except that we were scared to death of his gruff exterior.  He barked information and orders in a drill sergeant, commanding way.

There were four of us assigned to his car for our two-week behind-the-wheel session.  I didn’t know the other kids, but there were three girls and one guy.  The first day he asked, “Who thinks they know how to drive?”  I was the only one to raise my hand.

“Claughton,” (my maiden name) “take us for a ride!”  And he lit up a cigar butt that had been in his shirt pocket.  Since I had been stealing, I mean “borrowing” my dad’s car since 9th grade, I felt comfortable behind the wheel.

I drove us the whole two hours that first day, while he grunted directions of where to turn and kept a steady stream of descriptive terms about the other drivers on the road.   The other three kids sat straight as arrows, lined up in the backseat, waiting for their turns.

The next day, Coach chose another one of the girls, but she broke down in tears saying she was too scared to drive.  “Nonsense,”  he said.  “Smith, get up here and let’s see what you can do.  There’s no crying in baseball or driving.”

She cried so hard he finally had her pull over and started yelling, “Smith, you’re out!  Jefferson, you’re up.”  But, Jefferson was constantly taking his eyes off the road to look at Coach while he was talking.

“For God’s sake, Jefferson!  Do you have eyes in the back of your head?  Keep your eyes on the (bleepin’) road before you kill us.”

And just when Coach was really revving up, he had to slam the dual-control brake on the passenger side, just to keep us from sliding into another car.  Did we even have seat belts back then?

“Jefferson, you’re out!  Claughton, take us home, and be careful, for God’s sake.”

The next day, Coach told the last girl, “It’s your lucky day, Krowowski.  You can’t be any worse than Jefferson.  Get up here.”

Krowowski was a meek, quiet girl who I personally thought was stoned the whole time, but, she didn’t cry, so we were all hopeful that things would lookup.  Krowowski took the wheel and we pulled out of the parking lot with a jolt and a lurch, as she turned too quick and ran us up on the sidewalk.

In the backseat, I was in the middle.  On my left, Smith began to whimper and cry and Jefferson was already distracted with biting his fingernails.

I think Coach lost it completely because I heard some pretty graphic cuss words as we leaped off the curb into traffic.

And she did….right in a turn lane of cars.

“Not here…..there!” and he pointed to the parking lot, so she jumped us back over the curb from whence we came.  And Coach slammed his brake so hard we all flew forward.

It was obvious we were finished for the day when he told us to get out of the car.  We had to wait outside until our parents came to get us.

The next morning Krowowski did not come back, Smith brought rosary beads and Jefferson looked stoned.   For the next six days, Coach only let me drive.  I can’t say Coach imparted tons of useful driving instructions but I sure clocked a lot of driving time.   I drove us to Palo Duro Canyon,  we made stops at A&W Root Beer,  we drove through a cemetery, grocery store parking lot and got on the interstate every chance we could.  We ran his personal errands to the bank and Skaggs Drug Store.  Once, he got us all hotdogs at Der Weinerschnitzel. (four for a dollar.)   Coach puffed his cigar butts and sometimes slumped in the front seat barking, “Wake me up in 15 minutes.”

Right or wrong, I will never forget Driver’s Education and the summer I “learned” to drive.  It’s been over fifty years since I got my driver’s license and I still think of Coach. In fact, I still think of my Drivers Ed. group and wonder if they “passed” the class even though they rarely drove. It amazes me that no one complained or had their parents call.

Kids today who are learning to drive online are really missing out on an unbelievable experience.   I’m quite sure Coach would have something to say about it.  “For God’s sake, be careful out there!” 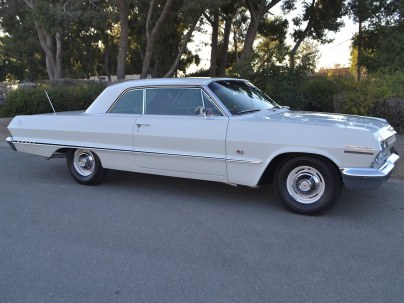 I haven’t always been a rule follower…in fact when I was 14 years old, I started to drive. This urge to drive took over my common sense like a speeding dart heading for the bullseye!  Not having a driver’s license did not seem to bother me and I was even able to convince my best friend that I could teach her to drive, as well.

At the time, my Dad drove a white, ‘63 Chevy Impala, so logically that was my car, too.  It was perfect!  I could get three people in the front and four or five in the back.  What could be better than taking your friends for a spin?

On this one particular day, my Dad had taken his ‘company car’ to work, leaving the Impala parked carefully in the garage.  As soon as he left, I found the keys to the Imala and began making my plans.  I’m not proud of this now, you understand, but for some reason, at that time I had no remorse.

My friend, Nitia,  walked over to my house and we took the ole Chevy out for the day.  Long, LONG ago, 50 cents would buy a lot of gas, so we came prepared to fill it back up if necessary.    I can’t remember where we went, but I’m sure it involved ‘seeing and being seen.’  There was probably a boy or two and maybe a trip to the mall incorporated into our plan.

After our joy ride, I was making the turn leading back to my house.  Unfortunately, it also went right by Nitia’s house.  This would have been ok except her dad was outside watering the yard.  When we noticed him, it was too late to turn around, and I instinctively yelled, “Duck!”  For some reason, I thought that was a good idea, and I ducked too.  It must have been a subliminal message or sheer ignorance, but surprisingly we crept safely by her house, ducked down in the front seat.  When we made it to my house, we parked back into the garage and congratulated ourselves on having a great day and dodging her dad.

Later that night at dinner, Nitia’s dad turned to her and said, “The weirdest thing happened today.  I saw Nancy’s Dad’s car drive by and no one was in it.”  Of course, she acted like she didn’t know what he was talking about and miraculously, her parents never called mine, but that was a very close call.

All during my 9th and 10th-grade years, I sporadically took that grand ‘63 Chevy Impala out for a drive.  I learned to drive in that car and finally got my driver’s license in that car.  It was my signature ride until I went to college and had to leave it behind.

If that ole Chevy could talk, it would keep us entertained for days with stories of friends, secrets, near misses and more fun than should be allowed.  I eventually told my Dad about some of my car adventures.  He was shocked, to say the least, but managed to chuckle since it obviously was past the statute of limitations for being grounded.

There might be another story or two about that ole Chevy, but for now, just revel in its sleek, thoroughbred beauty, and imagine yourself at the wheel!  It was a fine ride, yes indeed!