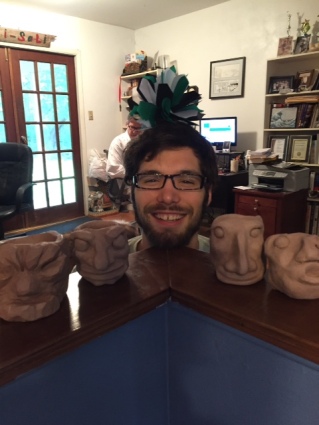 I remember voices coming from my then 3-year-old son’s room when I knew he was playing alone.  Who is he talking to?  The conversation was animated and varied, moving from voices of nervous urgency to calm reassurance.  I walked to the edge of his room and saw Evan dramatically playing with his Ninja turtles and action figures from the Alien movies.  His story included explosive sound effects as the mutant and alien worlds collided.  So early on, my then thumb-sucking boy created his own realities.  At age 4, a crayon helped him explore new forms of creativity.  As he sketched more and more, he mostly mimicked the Pokemon and superhero figures he and his brother loved.  His skill improved, and by 5, as a childhood friend put it, “You say ‘dragon’ to Evan and then BAM! there’s a dragon on the page.”

As soon as our son mastered holding a pencil, he experimented with putting images on paper.  He seemed to claim his future profession in elementary school, forever drawing at the dinner table, on the sofa, in the car, with his friends, or by himself. Often on Friday nights we went out to eat, and Evan invariably scrounged through my purse for scraps of paper or a pen or pencil.

When he matured to double-digits, he learned to have his own drawing supplies. Also, he learned from art teachers, like Ms. Webb at Travis Heights and Mr. Landon at Fulmore Middle School.    He won recognition at school and even once won an online contest to design a playing card for the Xiolin Showdown game.  In high school he experimented with photography and 3-D art, but he disliked the deadlines and restrictions of AP Art class.  In college he expanded his art exploration and surprised me when he majored in art education.  Evan used to encourage family members to draw because like Picasso said, “Everyone is an artist.”  So now he could spread that belief to young students.

Last summer Evan took an ACC pottery class and got up-close and personal with clay.  After college graduation he returned home, pulled out his leftover clay and fashioned these emotive heads: from goblins with menacing grins to elderly faces with pensive poses.  He began revisiting all his old art works, taking pictures, and organizing them.  (Portrait of the Artist as a Young Man)

Now my third-born son emerges before me as a guy with several guises.  He’s still the sensitive soul who carefully captures household spiders and geckos to release them in our backyard.  He’s still the consistent environmentalist who once did laundry in his bathtub at college and  abhors styrofoam and tells us half a paper towel is all you need.  He’s still the simple guy who needs little and wants less.

He’s the forever artist who sees an agile monster with a green grin cradling a bowl of fruit on a blank canvas or a sassy dragon contemplating its toes on an empty piece of paper or a focused ogre with huge lobster hands inside a lump of clay.

I marvel how my super-silly Evanator dancing in a Mardi Gras getup made of toilet paper at age 7 has become a focused, skilled, contemplative artist at age 23 who is ready to show the future that “Everyone is an artist.” 7 thoughts on “Evan, the Forever Artist by Ginger Keller Gannaway”